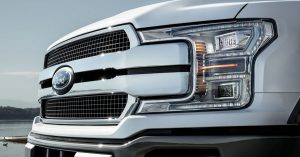 The fourteenth generation of Ford’s popular workhorse, the F-150, is launching in 2021 and it looks like there may be some substantial updates. One of the best-selling vehicles for over 40 years is preparing to wow expectant fans as it is revealed sometime in 2020. A camouflaged version of the truck was spotted recently while performing test runs, and here are the latest findings.

Being first and foremost a truck, the new F-150’s shape and profile remain pretty much the same as before; changes are noticeable, however, in regard to new headlights and taillights, front and rear bumpers, and door-mounted wing mirrors. The mirrors, previously mounted on the A-pillars, will have better visibility for the driver and improved rear viewing. This positioning should also help with the aerodynamics of the vehicle.

The truck looks like it may be a little larger than its predecessors with an extended crew cab and slightly longer wheelbase for better utility. The 2021 F-150 may also be a little taller offering greater ground clearance and therefore better off-road capabilities.

There is no doubt that the interior of the cab will have major improvements. Luxury will not be spared, particularly in the upper trims with many new exciting features in store for everyone. A high-tech cabin is expected with an infotainment center made to impress. Rumor has it that there may be extra options in the infotainment system for passengers to watch movies from the bed. A bigger touchscreen is also predicted. Comfort and convenience will rule the day and ride quality should be improved due to better suspension.

Because Ford has already updated the underpinning and the suspension system on the 2018 model, not too much change is expected apart from small tweaks. However, there is talk of an independent rear suspension.

The F-150’s current towing and payload capacities of 13,200 pounds and 3,200 pounds, respectively, are powerful enough, so they too will only have small changes, if any. Word on the street is that a 4.8-liter V-8 will replace the current 5.0-liter V-8, although this doesn’t rule out other powertrain amendments. Although this is not yet confirmed, we’re looking at 420 horsepower and 420 pound-feet of torque with a ten-speed automatic transmission. Improved fuel efficiency is also in the cards due to a lighter body.

A plug-in hybrid system is being introduced to the F-150 range, however, there are not too many details available. Ford is also working on an electric pickup in the future.

Ford’s next-generation F-150 will mix muscle with the innovative technology that customers want from a modern luxury vehicle. It’s likely that this new vehicle will be revealed mid-year in 2020, so there’s still plenty of time for testing and tweaking, allowing for a magnificent debut of the final product. As we await the new generation of Ford pickups, one thing is for sure, the 2021 Ford F-150 will not be a disappointment. Join us in our excitement for the next chapter of Ford trucks, and we’ll share updates and announcements surrounding the 2021 F-150.

Showroom: 8050 N. Church Road Kansas City, MO 64158-1166
Although every reasonable effort has been made to ensure the accuracy of the information contained on this site, absolute accuracy cannot be guaranteed. This site, and all information and materials appearing on it, are presented to the user “as is” without warranty of any kind, either express or implied. All vehicles are subject to prior sale. Price does not include applicable tax, title, and license charges. ‡Vehicles shown at different locations are not currently in our inventory (Not in Stock) but can be made available to you at our location within a reasonable date from the time of your request, not to exceed one week.

Find Your Next Vehicle

search by model, color, options, or anything else...